EEMSHAVEN - The official opening of the heliport in Eemshaven took place on Friday, September 13th. The Dutch Minister of Economic Affairs, Eric Wiebes, landed at the Eemshaven Heliport by helicopter at around 4 p.m. and then held the official opening ceremony. The opening of the heliport will further strengthen Eemshaven's position in the offshore wind sector. The helicopters handled there are mainly used for the maintenance of offshore wind turbines. Groningen Seaports has been working on the implementation of the heliport for more than seven years. After a comprehensive and careful process in close consultation with nature and environmental organisations, the environmental authority and the regional and provincial authorities, the northwestern part of Eemshaven has emerged as the best location. A location in industrial surroundings near Beatrixhaven, not far from the ferry to Borkum, but above all close to all offshore wind activities. Heliport Eemshaven's primary aim is to provide helicopter flights for the offshore wind industry, but it can also be used for ambulance and trauma flights, as well as for pilot transfer. On average, up to 15 flights per day are waited for, which are only carried out in daylight.
EMS Maritime Offshore (EMO), a wholly owned subsidiary of AG EMS, is the operator of the heliport Eemshaven. Groningen Seaports is very pleased about the commissioning of the heliport. CEO Cas König: "Our ports are already well connected to each other by water, road and rail, but with the opening of the heliport the air modality is added. This means that offshore wind farms can be reached better and faster, which means that the Eemshaven has once again become more attractive as a service port for the maintenance of offshore wind turbines." The operator EMS Maritime Offshore is also pleased about this milestone. CEO Dr. Bernhard Brons: "With our comprehensive maritime services at sea and in various port locations, we offer a broad portfolio for the supply of offshore wind farms. With the operation of the Eemshaven heliport, we are supplementing this offer and offering our customers an additional service".

In recent years, Eemshaven has not only developed into one of the most important offshore wind ports around the North Sea (16 offshore wind farms were built above Eemshaven), but also as a service port for the maintenance of offshore wind turbines. Eemshaven is already the maintenance base for the Gemini, Veja Mate, Merkur Offshore and Deutsche Bucht wind farms (a total of 316 turbines), and due to its location, the entire supply chain and the potential of many other planned wind turbines in the North Sea, Eemshaven is already the maintenance base. Eemshaven will further strengthen its position as a base and service port with a take-off and landing site for helicopters, as the owners of the modern large wind farms use both ships and helicopters for their service and maintenance work. 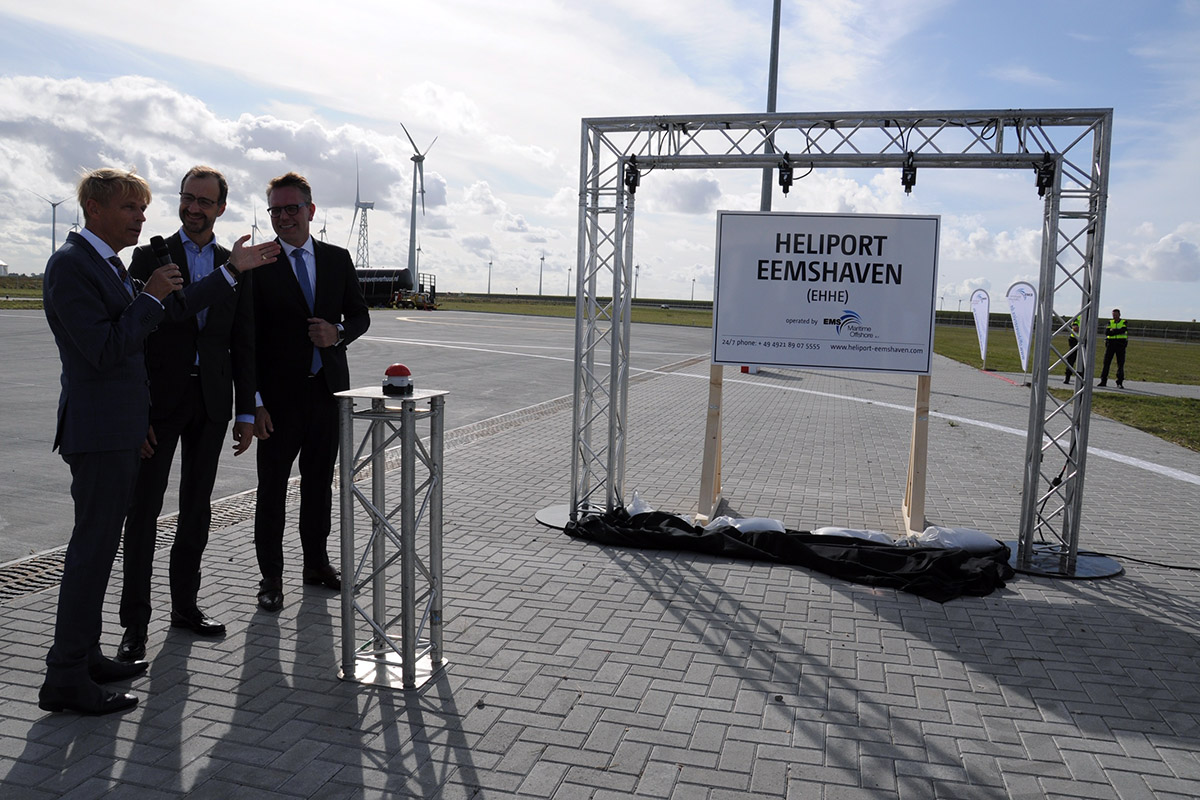 AG "EMS" chairman Dr. Bernhard Brons, the Dutch Minister of Economics and Climate Eric Wiebes and Cas König, CEO of Groningen Seaports unveiled a notice board and opened the heliport.